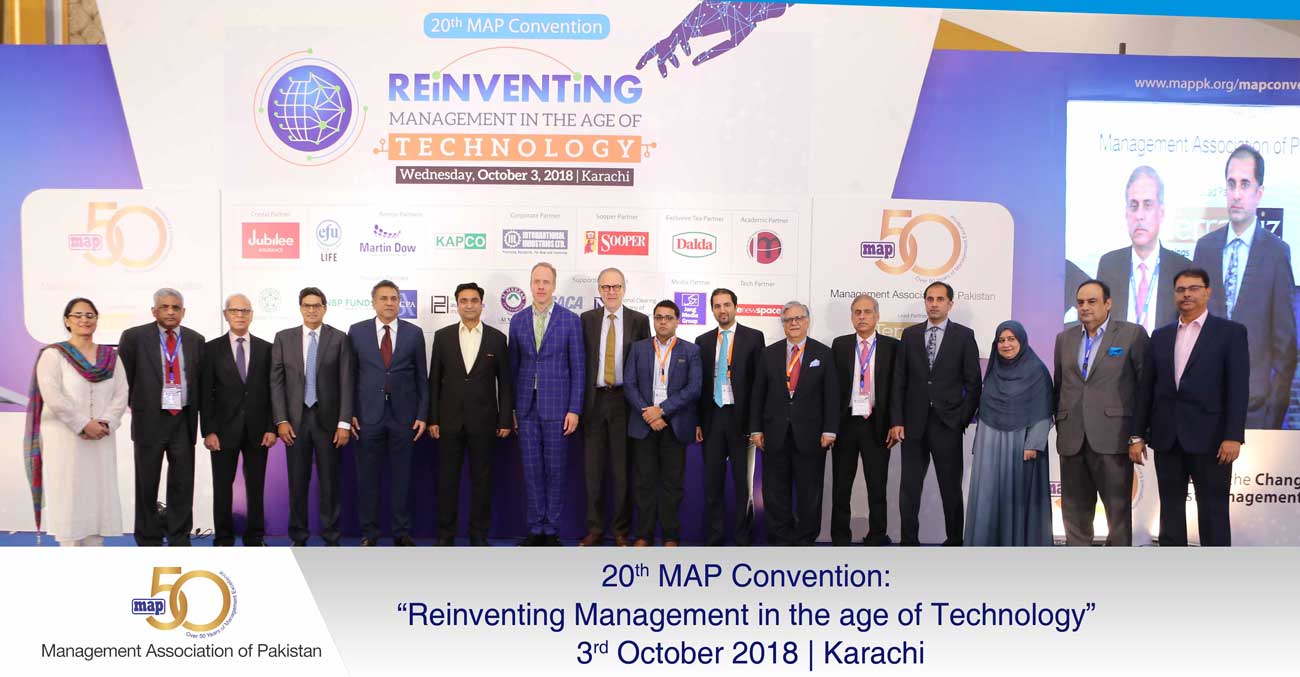 Management Association of Pakistan (MAP), in collaboration with Terrabiz, held its 20th Convention on 3rd October 2018 at Karachi Marriott Hotel on the theme “Reinventing Management in the Age of Technology.”

The Convention highlighted that reinvention of management is posing a fundamental shift in today’s business world. The new reality is that firms gain advantage, not by working efficiently, but by coping up with the change that is happening around.

To cope with these challenges, management needs to be reinvented. The technology revolution is another shift that is giving birth to entirely new ways of conducting business.

The Convention started with the welcome address by Mr. Asif Ikram – President, MAP who underlined how the rapid adoption of technology is creating disruption in the business globally. He said, “The rapid change is putting existing organizations under tremendous pressure and driving them into the land of irrelevance.”

The keynote session of Magnus Lindkvist, trend spotting futurologist and author of the book, The Attack of the Unexpected, was the highlight of the Convention. He discussed that how the world is revolving around change. Magnus stated, “The future is a thing that changes and disappears. The future of yesterday will be different tomorrow”

Magnus enlightened that all of our conflicts and competitions among each other originate from the fact, not that we are running out of resources or ideas, but because we are a little bit lazy to explore what we want for ourselves, so we all end up running after the same thing.

“We need to know what nobody else is doing which is truly difficult to answer and it lies at the heart of future thinking,” Magnus elaborated.

“Many companies are established by R&D which means Rip off and Duplicate. Taking off risk is difficult but ripping and duplicating is easy,” Magnus further stated.

He also envisioned how most of the people are being dominated by mimetic desires. “We don’t really know what we want but we are aware what other people want so we go for what they want for us,” Magnus explained.

Other eminent corporate personalities who marked their presence in Convention also shared their views on the theme.

While addressing the session on the topic ‘The Digital Consumer’, Irfan Wahab Khan – CEO Telenor Pakistan, highlighted how the rapid technological revolution is changing our engagement with customers.

Humayun Bashir – Chairman Board NCCPL, chaired the session on the topic: ‘Driving the Agenda in Pakistan’.

The session began with the address of Khurram Hamid – CDO Pfizer who discussed the ‘Roadmap to Digital Transformation’. He said, “In order to start the digital journey, senior leadership needs a growth rather than a fixed mindset.”

Umair Hameed – partner, Financial Services, FinTech, RegTech, KPMG (UAE) presented his views on the topic ‘Going Beyond the Hype – Making Blockchain Real for Business.’ “Blockchain is trying to address the issue of trust in transaction making by providing assurance that our transactions are authentic and genuine,” Umair stated.

Humayun Bashir concluded this session with his closing remarks followed by Q/A with the audience.

After the lunch break, Ehsan Masood – Knight Fellow in Science Journalism, spoke on the topic: ‘New Perspective on Pakistan’s Science and Innovation Policies.’

Later, in the second half of the day, Zainab Hameed chaired the panel discussion on the topic ‘Empowering Women with Emerging Technologies.’ The panel comprised of Dr. Ayesha K. Khan – CEO Acumen, and Rabia Azfar Nizami – Member of Provincial Assembly of Sindh.

Asim Rashid – Founder & CEO CreativeSwan Consulting led his session on the topic, ‘Re-engineering Human Capital to Cater Future Challenges.’ He said, “The skills get irrelevant pretty quickly compared to the past and that means people will have to re-imagine and re-invent themselves more frequently than the past.”

For the participants, the Convention was a massive networking opportunity with the corporate luminaries of Pakistan.

The Management Association of Pakistan, formerly West-Pakistan Management Association, was formed in 1964 by a small group of senior professional executives. It came about to meet the impending demand for managerial talent within the country, consequent to the rapid increase in industrialization.